Per LA County Department of Public Health, masks must be worn at all times indoors and in NHM's Butterfly Pavilion. View our COVID-19 Safety Guidelines for more information.

Bringing together Latinx hikers, campers, and environmentalists in Los Angeles

Angelenos Building Community is a series of stories from a diverse range of Angelenos and the work they do in support of their community in Los Angeles. The Natural History Museum of Los Angeles County is committed to uplifting the voices of community members who strive to create an equitable, accessible, and inclusive community for all.

Christian La Mont is a storyteller, scribbler, community organizer, volunteer, activist and environmental advocate. He was Born in Mexico City, Mexico and is at home in Los Angeles.

Christian's education and background in documentary film production, including co-directing the first ever U.S. Paralympic Team processing video, and a stint in the Bering Straits region of Alaska working behind the scenes of a reality show, eventually led him to a career as a digital and social media strategist which allowed him to combine his passions of storytelling, community organizing, advocacy and communication to amplify and support underrepresented voices through digital media formats. His work had been recognized in PBS.com, Newsweek.com, the Root.com, Vice.com, and even got a shoutout from filmmaker Ava DuVernay. Since joining the Latino Outdoors movement as a volunteer and then staff member, Christian has collaborated on and led initiatives and campaigns including REI's Opt Outside, Hispanic Access Foundations's Latino Conservation Week, Juntos Mejor, Together Apart and Yo Cuento 2020, a campaign to recruit and engage Latinx storytellers and encourage participation in voting and the 2020 Census.

When not staying home during a pandemic, you can usually find Christian introducing families to outdoor activities, attending a community meeting, volunteering as a poll worker, or marching for a cause he believes in. Currently Christian is involved in local and environmental initiatives including Cradle Los Angeles, Our Water LA and EPOC L.A.. He has been a presenter for the Audubon Center's Rooted in Rights, led a training for Latino Outdoors, and has been a guest speaker for Nature for All's Leadership Academy courses all focused on the power of digital storytelling in conservation. Christian has traveled with NPCA and met with State representatives in Sacramento advocating for parks and deserts and gone to Capitol Hill in DC as an advocate for the Cesar Chavez Monument and Rim of the Valley expansions. Most recently, Christian was featured on Facebook and Instagram Live with the American Alpine Club urging members of the outdoors community to speak up, volunteer as poll workers and register to vote. Above all, Christian believes in the power of caring, access to the outdoors, celebrating culture, and making a difference, as individuals or as a community.

Latino Outdoors is a Community Partner of NHM (What's this? Learn more).

Watch a video interview between Christian La Mont, of Latino Outdoors, and Michelle Race, Community Science Manager, as they discuss the importance of providing access to the outdoors for all Angelenos. 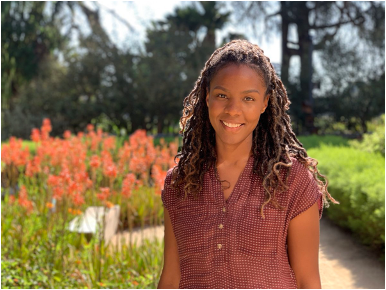 Michelle Race is a science communicator, museum educator, and co-founder of LA based outdoor group Black Girls Trekkin'. Since 2014, Michelle has worked at the Museum developing curriculum and teaching at schools across LAUSD with Mobile Museums. Before becoming a Community Science Manager, she was the LA 2050 Community Science Coordinator where her work focused on expanding the reach of the Community Science Program to increase engagement in nature exploration across Los Angeles.

Michelle received a B.S. in Marine Biology from San Diego State University. She also holds an M.A. in Biology from Miami University, OH with a focus on connecting underrepresented communities to environmental science and the outdoors.

Can you tell us a bit about yourself? Did you grow up in Los Angeles?
The short version is that I was born in Mexico, was raised in Colorado, and live in Los Angeles. I was born in Mexico City, Mexico where my family goes back generations as newspaper columnists, generals from the Mexican Revolution and so on, so it was a big deal when we decided to move to the U.S. We immigrated to Los Angeles for the 1984 Olympics and I remember one of my very first memories in the U.S. was a baseball game at Dodger's Stadium. While Los Angeles and Mexico City are worlds apart, they are very similar in so many ways - the feel of activity, of community, opportunity and of culture. My parents, my brother and I then moved to Colorado where I spent my childhood. Colorado was an amazing place because you had the Rocky Mountains in your backyard, but it was also very isolating and very lonely. My father was one of the only Latinos at his position at his work, my brother and I stuck out at school because of the food we enjoyed, the family traditions we had, the tastes we had, even the way we would jump in and out of English and Spanish while at home. When I had the opportunity, I couldn't wait to get back to Los Angeles - a city I still believe to be a place of activity, community, opportunity, and culture. Most of my family lives in Mexico City still, my parents worked hard for the life they have in Colorado and love it there, and meanwhile I've now spent more time living in Los Angeles than any other place, and I'm so incredibly thankful to call L.A. my home.

Can you tell us a bit about your job/career?
I consider myself a storyteller and a bit of a community organizer, and those two intersect in Latino Outdoors and the work I have done in digital media. My background and education is in documentary film production, having studied cinematography and production at Brooks Institute of Photography. During my storytelling career, I co-directed the first ever US Paralympic Team processing video, did a stint in the Bering Straits region of Alaska working behind the scenes of a reality show, and eventually that led me to a career as a digital and social media strategist which allowed me to combine my passions of storytelling, community organizing, advocacy and communication to amplify and support underrepresented voices through digital media formats. As Michelle mentioned (referencing interviewer Michelle Race), my work has been recognized in PBS.com, Newsweek.com, the Root.com, Vice.com, and even got a shoutout from filmmaker Ava DuVernay. Since joining the Latino Outdoors movement as a volunteer and then staff member, I have collaborated on and led initiatives and campaigns including REI's Opt Outside, Hispanic Access Foundations's Latino Conservation Week, Juntos Mejor, Together Apart and Yo Cuento 2020, a campaign to recruit and engage Latinx storytellers and encourage participation in voting and the 2020 Census. The last few years have shown me how incredibly important it is to reshape the often-antiquated narratives around conservation, and how to encourage younger outdoor enthusiasts to tap into that voice and to tell their own stories. While the old narrative has been that Los Angeles is just full of concrete with little green or open spaces and that Latinx people don't really do the camping, hiking, and environmentalist thing, the power of social media has really allowed Latinx hikers, campers, and environmentalists in Los Angeles to rewrite that tired old storyline.
Not only do they exist, but they've always been there. Now that we can tell our stories with the flick of our phone and a clever caption, we're shattering these stereotypes and encouraging others to join us. We're actually building community while we do the work of rewriting the narrative. Latino Outdoors and so many other local partners and outdoor organizations are instrumental in creating the space where that is not only welcome, but encouraged and supported.

How do you incorporate community in the work you do?
Incorporating community in the work I do is one of the most important things that I actually can do. It's critical. Whether that's guiding new volunteers through the onboarding process, designing a campaign, leading an outing for first-time kayakers or snow shoers (during pre-pandemic times of course), I need to listen to my community. The difference between going on a hike by yourself and going out with families and strangers who turn into friends, is community. From the way you frame your outreach efforts, to the way you pick the location, the feedback you get, the barriers folks encounter, the partnerships and collaborations you engage in along the way, those are all possible because of like-minded community-members. We play the role of host and guest at the same time when we lead outings, we play the role of coordinator and hiker, we play the role of community organizer and community member. One informs the other, always. Without the community, without the input and support, without those personal connections and reflections along the trail or over email, it just wouldn't be the same. Los Angeles has hundreds of communities, from all walks and all flavors of life, however I've found that the community I feel the most welcome in is the community that I share a trail or a hike with, whether it's a path around a local park downtown, planting a tree with, roasting s'mores with looking at the DTLA skyline, sitting around a table and problem-solving with, or joining for bird watching at Debs Park.When it comes to community, Los Angeles is the biggest small town in the world. We are one, beautiful, complex, imperfect, ambitious, and caring community. Above all, through my work in Los Angeles and now on a national level with Latino Outdoors, I believe in the power of caring, access to the outdoors, celebrating culture, and making a difference.

Welcome to "Angelenos Building Community" where we will hear stories from a diverse range of Angelenos and the amazing work they do in support of their community in Los Angeles.
Read more
Share: Share page on facebook Tweet this page