Our museums will be closed until further notice to minimize the spread of COVID-19. Our first priority is the well-being and safety of our guests, staff and volunteers. Stay up to date with NHMLAC's response to COVID-19.​​​ Nuestros museos estarán cerrados hasta nuevo aviso para minimizar la propagación del COVID-19. Ve la respuesta de NHMLAC ante el coronavirus (COVID-19).

Abandoned Baby Animals: What Should You Do?

What to do if you see a wild animal that you think needs help.

Earlier this month, I received an e-mail from a friend of mine asking if I wanted to adopt “a tame squirrel.” I paused and reread her sentence, and then saw a photo of an extremely cute baby squirrel. 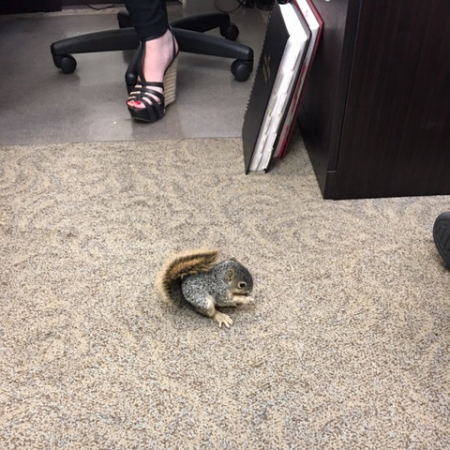 Through several e-mail exchanges I learned that my friend’s coworker saw the baby squirrel in a park near her home, and was surprised at how unafraid it was of people (it came right up to her and let her touch it). Worried that this squirrel was a lost or abandoned pet, she picked up the squirrel, placed it in a box, and took it to her office. Everyone in her office was amazed that the squirrel was not afraid of people, and that it would let them touch it. That’s when I received the e-mail about the squirrel.

My first thought was, “Oh no! Why was that squirrel picked up?” I did some chastising since I told them that the baby squirrel may not have been lost or abandoned, and that since it was a baby that could explain why it wasn’t afraid of people. I knew that the person who picked up the squirrel thought she was helping, but taking an animal away from its home is not recommended. My friend asked if they should release the squirrel at a nearby golf course, and I quickly said, “No!” 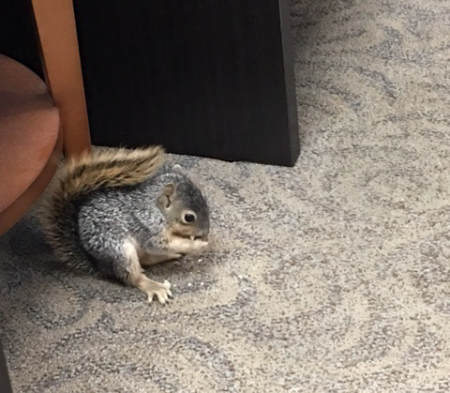 Animals in a successful habitat know where food and water can be found, know where they can take shelter to avoid predators and the weather, and have enough space to avoid high rates of competition. If this squirrel was placed in that golf course, it would not have been familiar with its surroundings, would not know where food, water, or shelter could be found, and it is not likely that the squirrels living in that golf course would have accepted it. Also, if animals are successful in establishing themselves in new areas, they can have a negative effect on the animals already there.

I spoke with Leslie Gordon, who is one of the managers in NHM’s Live Animal Program, and she had some great insight about "helping" wild animals:

"It is not just unwise, it is illegal to keep a wild animal without a permit. Squirrels especially make terrible pets. Even those dedicated to raising them (with permits) note they are flighty, inconsistent, difficult, and ... well ... 'squirrelly.'

Fear is a healthy thing for animals; friendliness is not. Wild squirrels (or any animal) can carry a plethora of zoonoses (diseases or parasites that can spread to humans). Squirrels, in particular, can also carry the plague. So when you see one that seems 'unafraid,' that doesn’t necessarily mean it wants to be pals. It may be very ill.

A lack of fear can also mean it has been habituated to humans by feeding. If you have ever heard the term 'a fed (blank) is a dead (blank)' that is what it refers to. Squirrels become habituated to humans and unafraid of them. When this happens they become food aggressive and begin to chase any human they find. It begins a loop of aggression (squirrels especially seem to find it satisfying when we run away screaming) that ends up with a squirrel being trapped by the city due to complaints and killed, or worse a kid getting bit. This is why rehabbers go to great lengths to avoid the animal seeing them or associating them with food, so it can be released again and keep its fear of humans. Don’t feed squirrels (or any wild animal)!

If you see an animal who is unafraid, it is not wrong to leave it alone, especially if it seems otherwise safe, and simply report it to city animal control. They do bring animals to rehabbers when they can.  If it seems in danger of being killed or injured, and you feel you can keep yourself safe from disease or bites, it is okay to bring it to a rehabber or shelter yourself."

If you see a wild animal that you think needs help, it is recommended that you contact a wildlife rehabilitation center and/or animal control, rather than to try and help the animal on your own. Below is a list of places you may contact.